Make sure to include valid contact details when reaching out to an employer.

Zion Adventure Company was born in February of 1996, when  Rick Praetzel, an ex-high school math teacher, planned a climbing trip to Red Rocks, Nevada. On a rest day, he brought his companions to Zion to hike the Narrows, something he had done only once before. Although air temperatures were in the 60s, what he found at the end of the Riverside walk was a river that was too cold to hike in. They had to turn back. 15 years of outfitting experience on the rivers in Pennsylvania led Praetzel to remark, “You know, if we just had the right gear, we could go.”

Held off by the frigid water temperatures, the group drove back to Springdale, looking for equipment to rent. They found nothing. "It's too cold," everyone said, "Come back in summer."

On the plane ride home to Telford, Pennsylvania, Zion Adventure Company was born. Rick and his partner worked on a plan to provide gear that would make hiking the Zion Narrows more comfortable, safer, and accessible year-round; enabling more visitors to explore this mystical place.

They searched for drysuits during a time when locals were wearing wetsuits in the canyons. They couldn't find anything quite right. And so wIth that discovery, they designed the first drysuit made specifically for canyon hiking. Although Henderson Aquatics, in Millville, New Jersey, was a wetsuit manufacturer, they agreed to build a prototype and manufacture the drysuits. The innovation continued with Five Ten, formerly known as a rock climbing shoe manufacturer, on the final design of the Canyoneer - the first canyoneering shoe on the market. Thus, Zion Adventure Company brought the idea of the Narrows hiking package rental to Zion Canyon.

As a matter of fact, anything that could be designed and made by hand, was- the sign above the door, the Narrows orientation map painted on sliding dry erase boards, all of the store displays, benches - everything. We even introduced the idea of the Narrows orientation, outlining the risks and including tips for hiking up the river. The idea of Narrows rental equipment was such a radical idea, that it took some time to gain support from the community.

And then it wasn't long before we realized that we could do better; that our purpose was not just to provide equipment for the Narrows. During a late night meeting, Zion Adventure Company's true purpose was revealed when owner Michele Van Hise, also an ex-elementary and middle school teacher, remarked, "We need to just help everyone as though they are our friend." That simple comment brought a consciousness to everything we had already been doing. We ultimately just want to be a benefit to others; to help in any way we can.

Since those very first days, we have expanded our services, developed highly technical approaches to hiring and training, written a comprehensive guide training curriculum, donated our services and financial support to over three dozen charitable organizations, and continued to be the leaders in this industry.
​

Our job is to help. It all comes down to listening and developing the relationships that allow us to be a benefit to those around us. Whatever we can do for you, we will. We look forward to the opportunity to serve you. 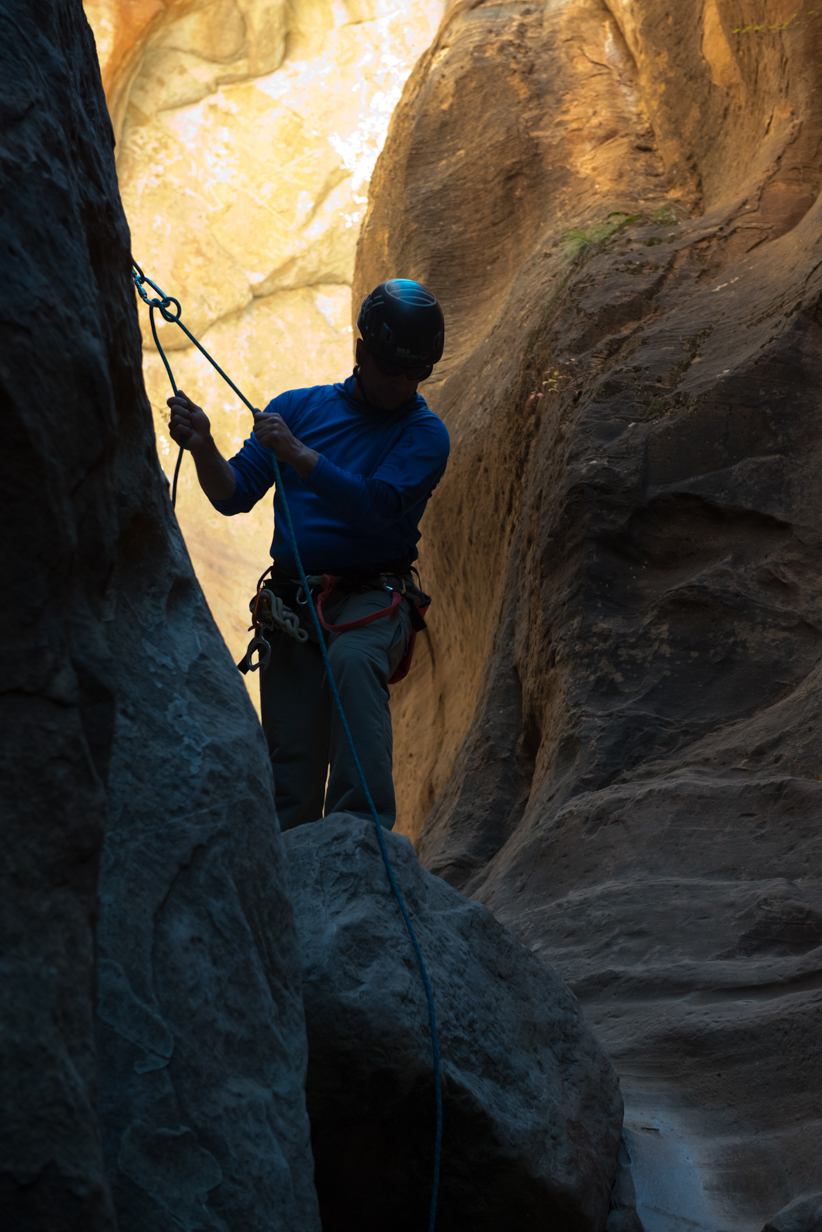 Year after year, high performing staff have many of the same things in common. They are happy, improving & growing in helpful ways, like working hard, showing care for those around them, and feeling connected to people, and with the ZAC mission. Life here is an adventure as we explore the world outside and seek greater understanding of the human experience.

Our staff come to Zion from all over the country. For many of us, our co-workers are an essential part of our community. We support each other, and we want to be supported. Getting to know each other is part of the adventure. Our lives overlap. We laugh with each other if the lid falls off the salt-shaker. We feel your pain when you run out of coffee. Often our coffee runs are expedited by the fact that we have each others' drinks memorized.

Springdale is a small town. Some staff easily make connections with people outside the staff. Others find their best friends within our staff. There is no requirement from Zion Adventure Company nor its management that you spend your personal time with your co-workers. As you look for recreation outing partners, some may naturally come from the staff, and others from the townspeople.

Some staff members have mentioned we are like a family. This is true to a degree. We care about you, want you to be happy, and to succeed. At the same time, we want to cautiously encourage you to think of the term “family” in helpful ways. Co-workers can help you, but won’t do everything for you and can't manage your life for you. We need you to do your job well and consistently. No amount of being close to co-workers alleviates this need to perform. We expect staff to be responsible and accountable. You need to take responsibility for your success and happiness. Help is almost always available and we encourage you to ask for help when you need it. Just a few of the ways we have helped each other are ride to the airport, technical assistance changing flat tires, and support meeting self-improvement goals at work.

The Zion Adventure Company staff is an incredible team of connected individuals. Each of us wants to work with great people. Our hiring team does its best to find you and hire you. We pursue a high quality of life for ourselves, our guests and want the same for you. Staff members want each other to be great, and to pursue excellence in all they do. They also laugh a lot at the the funny and ironic moments we share.

About Adventure Job Board

We have worked and lived in some of the best places on earth. The experiences that come with seasonal and full time work in adventurous settings are life changing to say the least. We built this job board to share those opportunities with passionate job seekers while connecting employers to the best possible candidates.

Give us a shoutout

Have a question about a job or a place? Need a little extra encouragement? Know of a great place that we haven’t discovered yet? Send us an email, tag us with #AdventureJobBoard on Social, or release the courier pigeons. Contact us. We can’t wait to hear from you!

Please sign up here to receive a newsletter listing all our latest jobs, offers and updates.

This website uses cookies to improve your experience while you navigate through the website. Out of these cookies, the cookies that are categorized as necessary are stored on your browser as they are essential for the working of basic functionalities of the website. We also use third-party cookies that help us analyze and understand how you use this website. These cookies will be stored in your browser only with your consent. You also have the option to opt-out of these cookies. But opting out of some of these cookies may have an effect on your browsing experience.
Necessary Always Enabled
Necessary cookies are absolutely essential for the website to function properly. This category only includes cookies that ensures basic functionalities and security features of the website. These cookies do not store any personal information.
Non-necessary
Any cookies that may not be particularly necessary for the website to function and is used specifically to collect user personal data via analytics, ads, other embedded contents are termed as non-necessary cookies. It is mandatory to procure user consent prior to running these cookies on your website.
SAVE & ACCEPT